The Ocean City Police Department and the men and women, both sworn and civilian that fill its ranks, are committed to the highest levels of professionalism in providing service to both residents and visitors alike to 'Americas Greatest Family Resort', Ocean City New Jersey.

We dedicate ourselves to ensuring the public’s safety and will strive toward enhancing the quality of community life for all members of our community through the discharge of our duties in a manner consistent with fairness and impartiality, while respecting the individual’s dignity, constitutional rights and human rights.

We recognize that team work is the cornerstone upon which our success as a law enforcement organization is built.  The foundation upon which that cornerstone is laid, is our partnership with the residents of the community we serve. 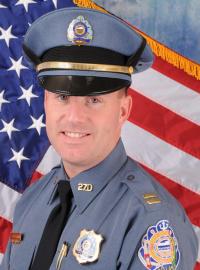 The Police Chief is responsible for ensuring the safety and wellbeing of the residents and visitors to the City of Ocean City.  Chief Jay Prettyman is the 12th Chief of Police to serve on Ocean City’s Police Department since its first in 1887.  Chief Prettyman started as a part-time Seasonal Law Enforcement Officer in 1992.  He worked two summer seasons before accepting a full-time Police Officer position with the Haddon Heights Police Department in Camden County, NJ, and then returned to the Ocean City Police Department in September of 1995 when he was hired as a full-time Police Officer.  In Chief Prettyman’s current role, he is responsible for a full-time sworn staff of 60 officers, 14 full-time civilian staff, and approximately 15 part-time civilian staff members.  In addition to the 74 full-time employees, Chief Prettyman employees approximately 50 additional Seasonal Law Enforcement Officers during the summer season, due to the influx in population.  These officers usually worked from April to October each year.

Under Chief Prettyman, the Department is currently organized into three Divisions; the Patrol Operations Division, the Special Services Division, and the Professional Standards Division.  Community Oriented Policing and Police Accreditation continue to be the backbone and the philosophy of the Department.  Both have resulted in many positive changes throughout the City, including enhanced community involvement with the local schools and civic organizations and maintaining the Department’s status as being accredited through the New Jersey State Association of Chiefs of Police.  The Ocean City Police Department is only the 2nd agency in the state to have achieved and maintained “Accredited” status for 4 re-accreditation cycles.

Chief Prettyman was raised in Voorhees, NJ and is a graduate of Eastern Regional High School.  He later studied Architecture at Temple University and later obtained both a Bachelor of Arts degree in Law/ Justice from Rowan University and a Master of Arts degree in Public Safety/ Environmental Protection from Saint Joseph’s University.  He has been the recipient of numerous awards and achievements throughout his career and is a graduate of the FBI’s National Academy Session #237.  He is also a New Jersey Certified Public Manager, a New Jersey State Association of Chiefs of Police Accreditation Assessor Team Leader, and is a certified Advanced Law Enforcement Executive.

Chief Prettyman resides in Ocean City with his wife Tiffany and two daughters, Phoebe and Chloe.

The Ocean City Police Department was created in 1884 when the City of Ocean City was incorporated by an Act of the State Legislature.  The City’s first Police Chief was Samuel B. 'Cappie' Scull.

In 1920, the Department experienced its first and only 'In the line of duty' death when Patrolman Harry Shore, a police motor officer, died in a motorcycle crash while responding to an emergency call.

As the Department expanded, it grew steadily to 35 officers in 1930 including a Police Chief, 2 Captains, 3 Lieutenants, 3 Sergeants, 6 Motor Patrolmen, and 20 Patrolmen.

Over the years, the Ocean City Police Department has maintained 3 separate prisons.  The first was a stall in a tool house which was in operation until 1897.

Due to Ocean City’s unique demographic make-up, the Department maintains two distinctly different organizational charts.  One for the off-season, and one for the busy summer season, which is commonly known as May, June, July, and August.  Over the years, the City’s busy season has grown to include April in the Spring and September and October in the Fall.

Ocean City’s population is reported to range between a low of 15,000 full-time residents in the off season to a high of approximately 150,000 residents during the height of the summer season.

Due to this fluctuation in the population and calls for service, the Department employs approximately 50 Special Law Enforcement Officers to assist the full-time personnel during the summer season.

Over the past few years, Ocean City has also been developing what is now known as 'The Second Season'.  This time period is often referred to as the 'Shoulder season', and encompasses the months of April, September, October, November, and December.

Through a highly successful marketing campaign, Ocean City has extended its 'Season' well into fall, and hundreds of thousands of visitors experience year-round shopping, a variety of restaurants, and family-friendly special events all the way until the annual First Night and First Day Celebrations on December 31st and January 1st of each year.

Today, the Ocean City Police Department consists of 68 full-time officers led by Chief Jay Prettyman.  Within the ranks there is 2 Captains, 9 Lieutenants, 12 Sergeants, and 44 Patrolmen.

The Department is currently organized into three Divisions: the Patrol Operations Division, the Special Services Division, and the Professional Standards Division.