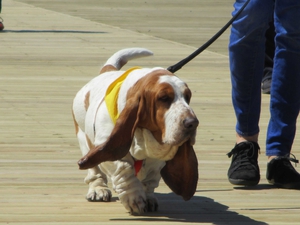 The dogs will get their day at a new event on the Ocean City Boardwalk on Saturday, Oct. 23.

Dog Day and the Humane Society of Ocean City’s Howl-O-Ween Parade will invite dogs and their owners to enjoy a day of fun on the Boardwalk, where pets are prohibited during the rest of the year.

Leashed dogs will be permitted on the Boardwalk from 9 a.m. to 5 p.m. Oct. 23, and activities will include dog-specific vendors at the Ocean City Music Pier, photo-op stations and the Humane Society’s announcement of Ocean City’s “Pet of the Year.” The event will allow owners to shop for dog treats, order custom engraved dog tags, shoot photos with Santa and much more.

People are encouraged to dress themselves and their dogs in Halloween costumes for the Howl-O-Ween Parade at 3 p.m. Registration is open now, and all proceeds will benefit the Humane Society of Ocean City. Day-of registration will start at 2 p.m. at the Ocean City Civic Center at Sixth Street and Boardwalk. The parade route will run from Sixth Street to 12th Street on the Boardwalk. Prizes will be awarded in a variety of categories with an awards ceremony at the 11th Street Pavilion following the parade.

To Register for the Howl-O-Ween Parade: