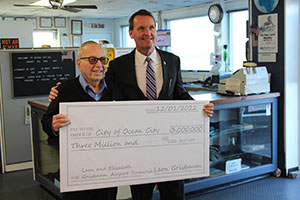 Leon K. Grisbaum, the owner of Berger Realty and an avid pilot, will donate $3 million to be used to construct a new terminal building at the Ocean City Municipal Airport.

The new facility will be named the “Leon and Elizabeth Grisbaum Airport Terminal” and house an updated airport terminal, restaurant and pro shop for the Ocean City Municipal Golf Course.

Grisbaum and Ocean City Mayor Jay Gillian announced the generous gift on Thursday at the airport.

“I’ve been flying here since 1948, and I want to see it continue on,” said Grisbaum, who owns planes that he keeps at the airport. He is also a past president of the Ocean City Airport Association.

Ocean City has conceptual designs for a new terminal building and has submitted grant proposals for NJ Airport Improvement Program, FAA and Bipartisan Infrastructure Law funding. The city will have designs for the new building completed in 2023, and they will determine a cost estimate and timetable for the project. The donation from Grisbaum will be placed in escrow and returned to him if the new terminal does not come to fruition.

The airport opened in the 1930s and is the only airport located on a New Jersey barrier island. The terminal building dates back to the 1960s and has reached the end of its useful life.

Among other amenities, the new terminal will include better facilities for pilots, an updated communications center, and a new second-story restaurant with views of the runway, wetlands and bay.

“Our airport is an invaluable asset to Ocean City, not only for travel and tourism, but for emergency management,” Mayor Jay Gillian said. “I’m extremely grateful to Mr. Grisbaum for a gift that will help us build an exceptional facility and for his many years of support for the airport. The airport has also been an important part of my life. My dad was a pilot and I flew in and out of Ocean City with him for many years.” 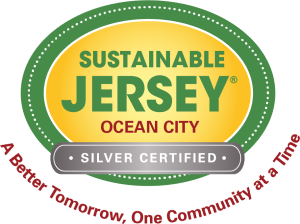